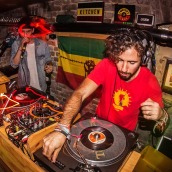 Since his introduction to Berlin’s deeply rooted musical heritage 20 years ago Jimi Handtrix has steadily developed an undying passion for sound system music – from early roots & dub to the newest in jungle, drum’n’bass & beyond – played on a proper system! Heavily influenced by the early sounds of the UK’s rave scene and Caribbean sound system culture, he inevitably found his calling as a deejay, promoter, label manager and musical activist, and hasn’t looked back since.

Through his continuous involvement in projects such as Dub Der Guten Hoffnung and Serendubity, as well as more recent endeavours such as A Bass Odyssey – recognised throughout Europe as one of Berlin’s highest caliber sound system events – and his label Higher Ground Recordings, he has found the means to express himself whilst seamlessly blending a large spectrum of styles, textures and tempos, thus creating a unique musical journey within each of his performances. 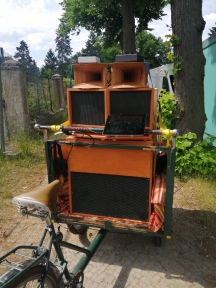 In lieu of the past 18 months of intermittent lockdowns, Jimi has used his time to work on some new projects which have been long in the making. In spring 2020 he crafted a mobile, battery powered sound system called Rolling Lion Hi-Fi, which has been making the rounds through the city, and providing the people with some much needed musical upliftment. And after a decade of tinkering with Ableton, he finally found the time to fully dedicate himself to music production, and played his first tune to a live audience in summer 2021.

Over the past decade he has steadily built a solid reputation as one of the go-to guys in Berlin for quality jungle, drum & bass, dub, dubstep and bass music, and abroad at festivals such as Outlook Festival (Croatia), Escape The City (Croatia), Bamboo Bass (Costa Rica), Cosmic Convergence (Guatemala), Ecologikal Reggae (Mexico), Plötzlich am Meer (Poland) and Fusion Festival (Germany), as well as smashing clubs all around the UK, Germany, Austria, Czech Republic, Netherlands, Canada, USA, Mexico and Puerto Rico!