2019 has been quite a year for sound system music in Berlin! Following in the footsteps of some top-notch events earlier this year – with the likes of Aba Shanti-I & Sista Habesha at YAAM Berlin on April 30th, an unforgettable third edition of our weekender at Mensch Meier one month later (where we invited the likes of Dub Dynasty, Alpha Steppa, The Bush Chemists, Moa Anbessa and many others), and an amazing mini-tour through Germany with Jah Shaka in early October – we finished off a great run with another heavyweight sound system extravaganza at Mensch Meier on December 7th! We would like to give a special thank you to everyone involved in each of these sessions – from the artists and sound system crews, to all the helpers, the venues, bar staff and security. And of course: to everyone who came from near and far to dance with us!

The fun and games already began on Friday, as the first guests made their way to Berlin. We invited everyone over to the RootsCafé in Neukölln for some drinks and tunes that night, and soon the whole family was there! Radikal Guru & Mack had arrived earlier in the day from Poland, while Bukkha just barely made his flight from Madrid, meeting up with Dubbing Sun – who had just arrived from Vienna – at the airport. Kunterbunt Soundsystem made it over later in the evening, and Pandadread Soundsystem arrived stylishly late after making the arduous journey from Poland – through the rain and several police checks. Soon what was meant to be a relaxed meet and greet leading up to the session, became a proper session in it’s own right, with the vibes running high and the beer supply running low! Around 3:00 we decided to call it a night, so everyone would still be fresh for Saturday.

On Saturday I was up bright and early – earlier than I would have liked to be honest! Pandadread – who had spent the night at our place – were already up and active by 11:00, and went out for a couple hours to explore the area. I used that time to freshen up, take care of some last-minute organisational issues, and pack my stuff for the upcoming 16-hour visit to my favourite venue! With a quick stop near Ostbahnhof, we got to Mensch Meier around 16:00 and began unloading the sound and setting up. Kunterbunt Soundsystem arrived around 18:00, and after a discussion about where and how to set up the sound, they began unloading, and quickly had their stack up and running! Unfortunately there was a minor injury while unloading, and their driver had to go to the clinic to have her thumb stitched (she was back in a few hours though – good as new!).. The job of a boxwoman / boxman isn’t always an easy one! Around 20:00 dinner was ready – thanks Markus & Jonathan! – and we managed to get everyone together (by that time nearly 30 people) in the backstage for a nice family meal!

Just before doors opened at 22:00, we gathered all the crew and staff for a quick introduction round, and the festivities began with Pandadread‘s warm up selection. Despite some grounding issues with the turntable, they got their rough’n’rugged speaker boxes warmed up nicely with a rootikal selection, and by the time Moonshine’s main man Mack stepped up, there was already a decent crowd in the arena! The talented DJ wasted no time turning the vibes up to 10 – playing some fresh dubs and laying the groundwork for the next artists to come. Next up was D-Operation Drop, who was joined by Saralène on the mic for a heartfelt set, with some inspirational lyrics and tuff riddims! Meanwhile, our friends from Münster – Kunterbunt Soundsystem – fired up their beautiful 6 scoop stack – one of the nicest sounds in Germany if you ask us! – with a heavyweight vinyl selection. Dubelgänger – who was running a bit late, began setting up his gear and eased into his first tunes. A bit later he was joined by Madeleine Sol on the mic. who delivered a very heart-felt performance! Next door in the Theatre, the Radio Massive crew – headed up by the Berliner veterans Bassdee & Feed – began spinning some classic vinyl from the golden era of Jungle! 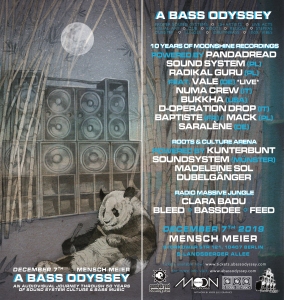 Back over on the Moonshine floor, the session was already in full swing, with Lapo & Ago from the Numa Crew taking over the controls from D-Operation Drop, turning up the heat yet another notch with their high-energy mixing and ridiculous collection of exclusive dubs! For the next 90 minutes they took the massive on a journey through their extensive musical repertoire – from their deep and dubby 140 sound, to some proper jungle and future dancehall at the end of their set. By the time Radikal Guru stepped up around 3:30, the vibes were high all around, and were only about to get higher! Joined by the hornsman extraordinaire Vale on the trumpet, and the lyrical madman Baptiste on the mic – the Guru proceeded to hype up the crowd with his signature sound and top-shelf selection! Meanwhile in the Räuberhöhle, Kunterbunt were back on the job, driving their finely crafted sound system via their custom “JB” preamp. Apparently the bar staff wasn’t quite prepared for the intense low-frequency vibrations though, and we had to watch the levels a bit, but we tried to find a healthy compromise for the staff and dancers alike! By 4:00, Version resident and HardWax member Clara Badu was wrapping up her set in the Theatre, giving the massive a taste of her rarely played jungle selection. Around 5:00, Bukkha took over the controls from Radikal Guru, and began to belt out a proper dubwise selection, heavy on the effects! By the end of his set at 6:30, energy levels were still running high, and we got the permission to keep playing until 8:00. Dubbing Sun, who had decided to book a flight to Berlin to meet up with the Moonshine crew – and was super helpful running the merchandise stand throughout the night – finally got the chance to step up and play some tunes, representing the somewhat more futuristic / 160bpm side of Moonshine Recordings.

After the session we took down both of the sounds, with Radikal Guru, Mack and myself helping Pandadread unstack their rig and load it into the van. We were on the road back to Neukölln sometime after 9 – looking forward to some much needed sleep! All in all the session was a lot of fun, with so many great moments and memories throughout the entire weekend. Everyone we invited had a great time, and we really felt their was a strong crew vibe on each of the floors! As usual it was a ton of work putting together the session, but I think it’s safe to say it was well worth it! Big thanks to everyone involved in making this event such a special one – we really appreciate all of your support!!