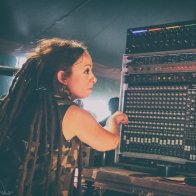 Growing up in a small village in Southern Italy with traditional country values, Habesha started off in life with strong principles. Her classical piano training was a challenge at the time, but now expresses itself in a new frequency. As she grew into her spirituality, she naturally rebelled against the Catholic Church, while still retaining the qualitative essence of a religious upbringing. Having spent her formative years immersed in the good vibes of Italy’s underground bass music scene, she eventually found Dub / Reggae and naturally Rastafari…

Moving to the UK to find a new path in life she got deeper into the music and faith as she learned the English language. As a regular at Aba Shanti sessions and other London dances in the mid 2000’s, she was exposed to the best of the early UK Dub / Sound System scene. Through her years-long connection with producers like Moa Anbessa, Dan Imperial and Roots Hi-Tek, she was naturally inspired to start producing her own tracks. In 2010 Habesha released her first tune on the “Italian Dub Community Vol. 2″ compilation, which was followed by a subsequent release in 2011 on “Italian Dub Community Vol. 3″. With the increasing appreciation and support by notorious sound system operators such as Aba Shanti-I & King Earthquake, she continued to create music while refining her own style. Combining her raw and militant drums and driving basslines with a sweetness and musicality not often heard in Dub music, her productions have a powerful impact. 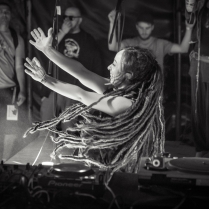 Habesha‘s first official vinyl release came in 2015 on the German label JahSoulJah Records, featuring tunes such as “I Am An Ethiopian” (with Joseph Lalibela) and “Hold Pon Rasta Faith” (with Fitta Warri). In 2016 she followed up with “What Dem Done” (featuring the powerful vocals of Vale B), which was released on the Italian Roots Cooperation imprint, and “Jah Voice” (featuring Italo-Senegalese rising star Sista Awa) on UK-based Steppas Records.

Representing for female musicians everywhere Habesha aims to inspire a new generation of feminine-empowered creativity in yet another male dominated industry… Through hard work, strong principles, and powerful yet beautiful music, Habesha‘s special expression of Reggae music is sure to touch the soul and inspire positivity and progression… LISTEN UP!!!

With 3 big vinyl releases in the past 2 years, numerous sessions across the UK, Germany, Italy, Poland & Morocco, plus sessions in California & NYC with Aba Shanti-I (and with upcoming sessions in Switzerland, Montpellier, Grenoble, at the International Dub Gathering and Dub Camp – Habesha is hitting the dub scene with full force 2019!!! If you’d like Habesha to bless your session with some heartikal vibes, please don’t hesitate to reach out!