Established in 2010 by London-based recording artist Alpha Steppa, Steppas Records is an independent hands-on record label, specialising in conscious sound system music with a deep roots foundation. Working with new artists as well as some of the most established in the scene, including Lee ‘Scratch’ Perry and the late great Gregory Isaacs, the unique dubbed out style of Steppas Records draws upon the sounds of Jamaican Roots, UK Dub and World Music filtered through an exploration of the newer sounds of contemporary bass music. With a focus on delivering high-quality independent music with a message, each of their releases is curated, designed and produced with love. 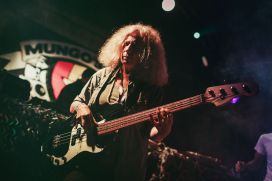 This year’s edition of A Bass Odyssey Festival kicks off on Friday, May 31st, with the legendary Steppas Records family coming to showcase their unique take on UK Steppas & Dub! In the truest sense of the word family, Dub Dynasty combines the talents of long-time musical activists, and brother/sister duo Alpha & Omega, who through their decidedly British take on dub / reggae in the late 80’s, were soon picked up by the foundational reggae label Greensleeves Records and would eventually go on to work with the legendary Jah Shaka, among others.

Joined over 2 decades later by Alpha Steppa (their son and nephew respectively), who had naturally been surrounded by their music from a young age, they went on form the live dub trio “Dub Dynasty“, with their first full-length album release in 2013. Since then they have released 3 full length albums and a number of EP’s on their own Steppas Records, as well as a number of other releases on labels such as ZamZam Records & Grand Ancestor among others.

For this special occasion they will be joined by the talented vocalist – and long-time co-conspirator on many of their projects – Ras Tinny, with whom they released such memorable tunes as “Black Rose”, “Monsoon Come” and the title track of their most recent LP, “Holy Cow”.

Further support comes from JahYu, whose unique blend of roots dubstep and oriental melodies caught the attention of the Steppas family, and led to the release of his first EP on their imprint in 2012. And as usual, full-frequency audio reinforcement will be provided by our local Lion’s Den Sound System!

“Our mission is to bring powerful, conscious and uplifting music to as many people in as many places as possible.”