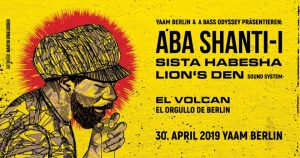 On Tuesday, April 30th, 2019, the legendary UK Sound System operator Aba Shanti-I will be playing an extended set on the Lion’s Den Sound System at YAAM Berlin! Support will come from Sista Habesha & MannaroMan from Italy. 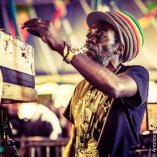 Aba Shanti-I has been spreading his positive message – both at home in the UK and abroad – with his sound system for over 25 years. From London to the far east, he’s widely considered – next to foundational artists such as Jah Shaka or Channel One – as one of the true pillars of the scene and one of the most important messengers for conscious reggae & dub music in Europe. With a rich musical heritage reaching back to his youth – with his father running his own sound system in the 1960’s – he would later go on to take over the legendary Jah Tubby’s sound system in 1990, and became a cornerstone of the legendary Notting Hill Carnival after his debut there in 1993. Since that time he has also released a number of albums & EPs, and continues to play regular shows at many of the UK & Europe’s largest sound system gatherings. 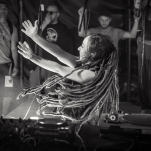 Sista Habesha: From her humble small-town roots, Habesha discovered Italy’s underground bass music scene from an early age, and eventually found herself drawn towards Dub / Reggae and the teachings of Rastafari. Upon moving to the UK, she soon found herself more deeply immersed in the culture, and as a regular at Aba Shanti sessions and other London dances in the mid-2000’s, she was exposed to the best of the early UK dub / sound system scene. Inspired by her years-long connection with producers such Moa Anbessa, Dan Imperial and Roots Hi-Tek, she began producing, and released her first tunes in 2010 and 2011 on “Italian Dub Community Vol. 2 & 3″ respectively. Over the years she continued to refine her own unique style, combining raw and militant drums and driving basslines with a sweetness and musicality not often heard in dub music. With a number of solid releases in the past years – including her debut vinyl in 2015, and the launch of her “Habeshites” imprint in 2017 – a busy tour schedule that has seen her travelling across the UK, Germany, Italy, Poland & Morocco, as well as to California & NYC, Habesha represents for female musicians everywhere,  while aiming to inspire a new generation of feminine-empowered creativity in yet another male dominated industry. Through hard work, strong principles, and powerful, yet beautiful music, Habesha‘s special expression of Reggae music is sure to touch the soul and inspire positivity and progression!